Movares also has extensive experience with steel and concrete in combination. There are many steel/concrete bridges all over the world, and the term “steel/concrete” covers not only bridges with a steel structure and a concrete deck, but also steel bridges where concrete is used in certain components to reduce pressure. Steel/concrete bridges usually take the form of a slab, lattice beam or box girder bridge with a concrete deck on top of the main girders and a main load-bearing structure of steel. At Movares, steel and concrete designers work on projects together, enabling us to produce optimum designs. 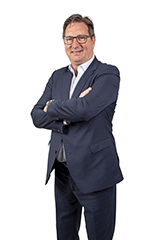 The Galecopper Bridge: one of the most heavily-used bridges in the Netherlands

The Galecopper Bridge on the A12 motorway near Utrecht is the second most heavily-used bridge in the Netherlands. This 327-metre bridge, consisting of two steel cable-stayed bridges, each carrying five lanes of traffic, was in need of major overhaul and reinforcement because of fatigue in the steel deck. The bridge manager (the Directorate-General of Public Works and Water Management) also wanted to increase headroom at the centre of the bridge by some 70 cm to allow the passage of vessels with four-layer stowage plans. Hundreds of repair welds were required, which meant taking special health and safety precautions. Contractor VolkerRail called in Movares on account of the complexity of the operation.

Safety
The work had to be carried out within a limited area, with traffic continuing as normal. To guarantee the safety of both workers and road-users, Movares was asked to draw up a health & safety plan and to manage and guarantee safety. The main issues were managing risk associated with welding fumes in confined spaces, fire hazards and escape routes. All the risks were identified in advance during a thorough study, and that formed the basis for a smooth operation.

6 million kilogrammes of steel
Four prestressed steel girders, each on its own foundation, were connected to the bridge. New sheet piling was installed before work began, to prevent subsidence. Then 270 foundation piles were drilled, and filled with concrete. New concrete piers were installed on the piles that were capable of carrying the reinforced, heavier bridge. Overall, almost 6 million kilogrammes of steel were used to strengthen the bridge, in the form of small steel components and large prestressed girders.

Jacking operation
Jacking the bridge into place was a spectacular achievement, with the deck being jacked at 32 points. Three nights were reserved for the operation, and the bridge was raised by approximately 22 cm each night. Once this was complete, the new bearings could be installed. Following repairs to the deck, the asphalt running surface was replaced by high-strength concrete, with a wearing course. These major works have extended the service life of the Galecopper Bridge by 30 years.

Welding and cutting robot
A large number of steel repair and reinforcement operations had to be carried out in a relatively short time. Furthermore, the welders had to do a lot of their work overhead, often for hours at a time, and often lying on the deck in an ergonomically less-than-ideal position. And there would be little chance of achieving a perfect match between a hand-cut hole in the deck and a machine-cut insert. The solution: a specially-developed welding and cutting robot.

The Netherlands is a densely-populated country, with many rivers and roads. As a result, there are many intersections between roads and waterways, and these intersections...
Read more